Menu
Home » Artist Advice and Tips » inspiration » What do Ice Hockey Players Have in Common With Artists?

What do Ice Hockey Players Have in Common With Artists?


Many kids in my part of the world (Canada) dream of becoming a NHL star. They idolize their favorite ice hockey players, whether it be Wayne Gretzky, Sidney Crosby, Alexander Ovechkin, and others. 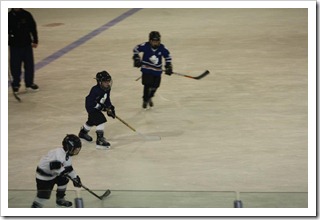 My little 8 year old son, Kolby recently began his first year as a minor hockey player, joining the Novice division of the Baie Verte Sabres. In his first practice, he could barely stand on his two skates. Every few meters he would fall on the ice.

After just a few practices he is now much faster, rarely falls, and can even skate backwards. (he makes me proud!)

After attending a few practices, I realized that hockey has some things in common with the artist profession - and becoming a ice hockey player requires many of the same traits as becoming an artist.

One of Kolby’s ambitions is to become a hockey player someday. This goal is shared by most of his teammates. He admires his favorite hockey players and wants to be just like them. This dedication can very well help him to achieve his dream someday. Of course, if someday he decides he wants to pursue a different dream, we will be behind him all the way. But, he is much more likely to succeed if he sticks with it through thick and thin, and does not give up.

Becoming an artist requires the same determination. The road to becoming a great artist and being recognized can be a very difficult journey. Do not go into it thinking it will be easy, because it’s not. It’s a journey that is not for everyone, but if you are resolute in becoming the best artist you can be – then I encourage you to seek out your dream with perseverance and ambition!

Kids are labelled ice hockey players as soon as they start playing hockey games; artists are labelled artists when they or others consider them to be one. 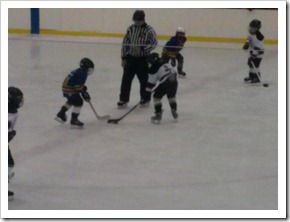 Kolby became a hockey player as soon as he began his first practice. He has only played one game so far, and has not scored any goals. He is not as skilled on the ice as some of the other players, but he is a hockey player just the same.

I believe artists become artists as soon as they admit it to themselves they are one. They may not have the years of practice and experience which accomplished artists have, but they can still be labelled an artist.

Deciding you are an artist is only the first step. It is a continual lifelong process that begins with the commitment to begin creating art!

People become great hockey players with practice and hard work. No kid goes straight to the NHL just after a few practices. Becoming an amazing hockey player requires playing lots of games, learning to handle the puck, taking advice from a coach and skating fast. Consistent practice is even needed for kids who have a natural talent on the ice. 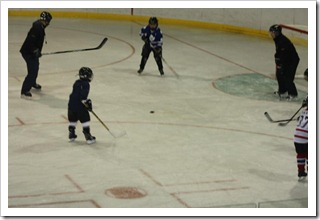 The same goes for becoming an artist. Even with natural born talent, no artist becomes great without practice - learning art techniques, mastering their medium, and looking at art from other artists. As the saying goes, becoming successful at anything requires “10% talent and 90% hard work”.

Proper art training (though not required to become an artist) will certainly speed up mastering an art medium and learning how to freely create.

Even after mastering a medium, you will find that there is much more to growing as a better artist. The artist’s life is about learning, experimentation, changing, improving and coming up with new ideas (as well as art promotion and showing art to others).

Even the best artist’s feel they can improve on artworks they have created in the past.

Working as a team. 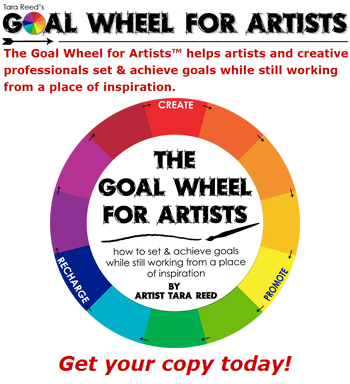 One player alone would not get much done in any team sport.

The best hockey players work with the team, and master their position on the ice – goalie, defence, left-wing, right-wing, or center.

Most artists are loners and like creating art by themselves. But, anyone who has experienced art retreats and holidays, participates in art clubs, or attends art classes, will know the benefit of creating with a group of artists instead of by oneself.

Artists learn much more by seeing how different people interpret an idea or model. You also get to see other artist’s reactions to your art. 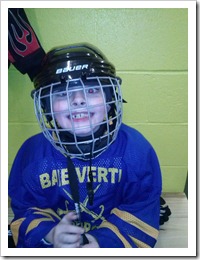 The best ice hockey players, and those who have any hope of getting into the NHL, have raw talent. They easily catch on and are naturally good at playing hockey.

The most successful artists have natural born talent as well. Often, art is something they felt passionate about, even at an early age.

Kolby has many more practices coming up this year. I’m looking forward to seeing how good he becomes by the end of the season. If he does join the NHL and win the Stanley Cup one day, it will not be without dedication, hard work and talent.