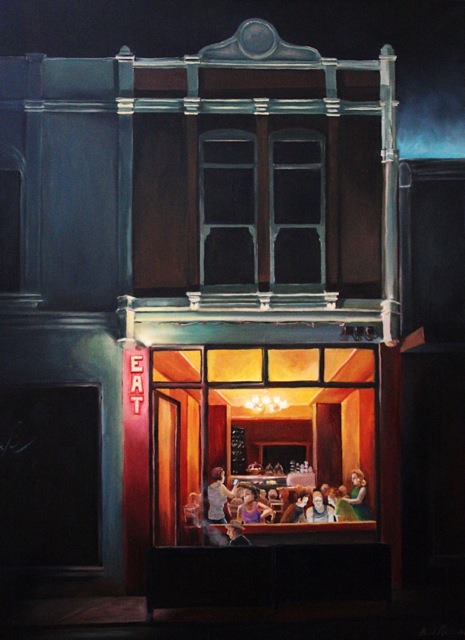 Anderson Street Feast © Llael McDonald Oil on Canvas 2013
"The Anderson St Feast" is a work that looks at the antisocial aspect of the online social network and its effects on peoples attitudes towards each other in both the real and online worlds. The people at the feast are socialising but disconnected from one another by their mobile phones and iPads. They not only feast in the literal sense but also feast on the rises and falls of their "friends" in the online world of social networking.

I started painting at the age of seven. I was never good at sport or academia so I realised at a very early age that I was put on this earth to be an artist. I studied fine art at a private art/design school located in one of Melbourne’s colourful and busy Chapel St. The school was put together by a group of students, myself included, and teachers from another Melbourne design school who walked out on its board of directors in 1994 because of creative differences.

We started the Independent College of Art and Design in 1995 and had the creative freedom and environment that a lot of students dream about. I graduated one of the top students in my major of oil painting 1997 and have been exhibiting since 2000. My work is strongly influenced  my surroundings.

I grew up in the Western suburbs of Melbourne and was considered to be lower class. There was a lot of drama and a lot of colourful characters around my neighbourhood and I guess that’s where I developed my interest in suburbia and it's characters.

Can you tell us about your first remembrance of creating something?

I first discovered I could really draw at the age of about five or six, I remember drawing a Mickey Mouse out of one of those how to draw books and I was amazed at how well I did. I took it to school and everyone was so impressed that it inspired me to keep drawing. It was the first time I was really noticed by my peers.

Do you like to have music playing while creating art?

I like listening to things like Jack Kearoac Beat Poetry or a like to put on a good movie to paint to. I think I’ve painted to Hitchcock’s "Rear Window" about a million times. Other than that, anything Jazz.

Is there a message you are trying to give to viewers of your art?

What is the typical process of your creation?

I work from photographs, so typically I will wander around a suburb that I like and take shots then go back to the studio, sort through them and pick out the images I like, then I sketch it onto a canvas and as I’m doing that I think about how a figure or figures could fit into the landscape and what story that person has to tell. I don't really use real people as my subjects. The figures often come out of my head. I think I see these people in real life and my brain files them away for a later use.

Once I’ve done the first wash of colours and covered the whole canvas I start to work with the light and shade. I put in the shade first and in the black or darkest areas I use a mix of burnt umber and ultramarine blue never a true black because I like to keep warmth in the shadows and true black oil paint is rather flat and uninteresting. I suppose I would do several thin layers of paint and on the last layer of paint and when all the detail of the landscape is put in I work on the highlighted areas and really make them pop.

The figure is always last, it's only when I get everything else the way I want it that I can put the people into my work and know that they will sit comfortably in the landscape. To finish I like to use a mat varnish on my work, again in several thin layers. 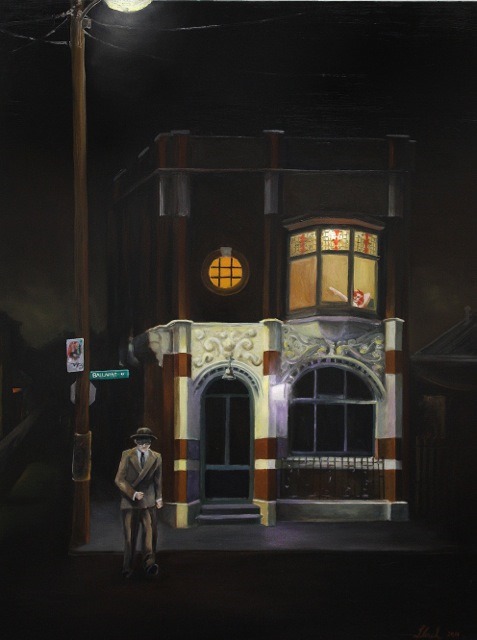 What are your inspirations?

Old Suburbs, back lanes and interesting looking strangers. Really its just a landscape I will see driving somewhere or walking to the shops and spotting a cute front door of an old home. Paint peeling off brick walls, old street signs, anything suburban, anything ordinary, anything old.

Do you sell your art?

Yes I have sold my work through Facebook, gallery exhibitions, word of mouth and through my website.

Mostly I use my website www.llaelmcdonald.com and my Facebook page. I like to share pictures of my work as it progresses and talk to other artists online about their work. I find if you build a community with other artists online you tend to get more work. Artists are great like that, if they can't do it they always know someone who can and you get work thrown your way.

I also have an email list and send out press releases when I am planning a new project or show and this usually gets me into some papers or websites. I find you really do have to be a little shameless when it comes to self promotion as an artist. I also register my website and my work on any site that will let me.

I am strongly influenced by Edward Hopper and Jeffery Smart. These guys are my heroes.

Dan Witz, Wow! what can I say. He's a hyper realist and I’m not usually a fan of this genre ( I mean just take a photo man) but his subject matter is awesome. He's a street artist and also exhibits in Galleries. He paints light like I want to paint light.

Open Late © Llael McDonald Oil on Canvas 2013
An example of the little private moments that I so love and adore. The possibilities and stories that the viewer is able to create around the characters in this painting are endless.

Please tell us an interesting event in your life

In my final year at University I was preparing my final portfolio and a student kidnapped my painting! Earlier in the term I noticed a large canvas sitting on the corner of the studio and said to my teacher "Who's Canvas is that? " He told me it was a students who left to move to Israel and wasn't going to need it so I could have it. Being a student with no money I jumped at the chance. There was a half completed painting on it so I took the canvas off, flipped it over and re- stretched it. I painted my painting on it and was very happy with it.

Then the guy who owned the canvas came back! He saw what I'd done, was furious and took the canvas saying he wasn’t going to give it back. I was hysterical when I found out, it was the key piece to my final folk and it was only days until a panel of well respected artist were going to be looking at my work. My teacher was great and negotiated with the guy as much as he could apologising to me for everything (I didn't consider it was his fault). In the end I agreed to pay him for the cost of the canvas and he returned it in time for my final folio evaluation.

What annoying things have people said about your art?

"That’s nice" I hate that! Oh and "What do you do for your real job?" Its so hard being taken seriously as a professional artist and that sort of attitude doesn't help. I have battled with most people in my life treating my work as my hobby not a carrier, its infuriating.

Do you have regrets in your life as an artist?

Yes, being an artist. Honestly sometimes I wish I just had no creative drive and was happy with a nine to five. Life's hard as an artist. You battle with being taken seriously by family members and friends and you battle with money problems and creative blocks. Your work is never done and your mind is always switched on.

What are your future plans? 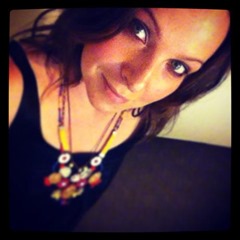 I’m working on some things to send to New York and LA. I’m also putting together a Kickstarter project with a friend in New York City and I guess I’m just going to keep on painting and submitting my work to galleries.

Promote yourself honestly and as much as possible and communicate with other artists.