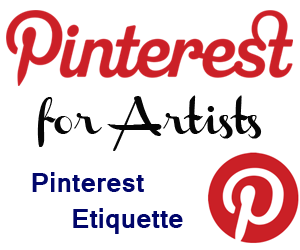 In the online business of social networking, many sites are here today and gone tomorrow. Many would only dream of becoming as popular as Facebook, with over 1 billion active monthly users. I think the main reason for the popularity of certain social networks is that they have found a niche and cornered the market in that area.

We all know why Facebook is so popular – because it helps people to see what their friends are up to at a given time, and is also a pass-time for many.

Youtube is the main go to site for video. Linkedin is mainly used for professional networking. The main website for images among many is now Pinterest. Pinterest (nearly 49 million users) still hasn’t surpassed Flickr (87 million users) in popularity, but is quickly catching up.

Pinterest’s quick growth is why I think it is important for artists to have at least some sort of presence there at this stage. Pinterest has grown by leaps and bounds in the past while, and is actually expanding its features to better serve users. They now have analytics for websites, and a brand new pages feature. The site also has a new streamlined layout. Pinterest updated their TOS a while back in response to an internet outcry from many concerned with them claiming ownership of images. It appears this site is in it for the long haul, and is set to compete with the likes of Facebook and Twitter.

With the large influx of Pinterest users comes the issue of etiquette. Some things people do at other social networks would not be appropriate at Pinterest. Pinterest has created their own page with etiquette rules, to educate users on appropriate actions when pinning. I also have included some additional recommendations here as well.

Pinterest is a very visual and inspirational site. Lets hope it stays that way and will be for a very long time. Following these rules of Pinterest etiquette will help!