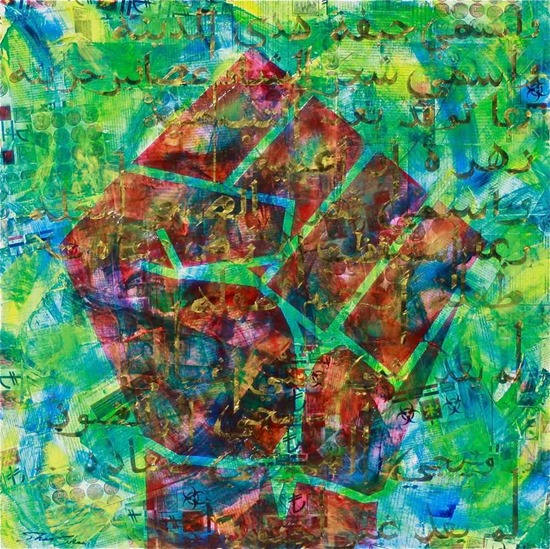 I got started painting back in the 90s during my BA at Indiana University. I studied abroad in various countries picking up styles and influences from each. In Poland I learned about surrealist theatre painting. In Spain I learned about Islamic art, Picasso and Flemish court painting. After living in Europe over 6 years, I returned to the US to see the high-tech world of San Francisco and have been living here ever since.

When was the first time you thought of yourself as an artist?

When I was younger I would doodle all the names of bands and video games on my folders, but I thought this was just normal. As I got older, I always returned to the creative process in my spare time. In college as I took art classes I started to realize I was an artist. After I branched into my own proper style in the 2000s, I then really saw myself as an artist.

Please tell us what your art is about.

My art is two-fold. One style is purely abstract that I developed first from my art professor using tape and exploring how the mediums interact layer by layer. My second style is political conceptual. I plan out each layer of the painting and then execute to that plan. As I have progressed, I have learned to pull in paper, foil and other objects in acrylic painting.

What music inspires you when creating art?

Almost always I prefer hard rock or metal. I think the violence in the songs play well against the style I am striving for. I believe strongly the art must be punchy, grab the audience and shake them up. So I like bands like Smashing Pumpkins, Rage Against the Machine and Nine Inch Nails. I also grew up on hip-hop and rap, but have not really painted against that musical background.

How do you find inspiration?

I gather my inspiration from other artists. Usually, I peruse 100s of photos on Flickr, especially graffiti. I really wish I had tried that as I was younger, but now I’m deep on the blue pill, so no turning back now Mr. Anderson.

Another source of inspiration is to read great books of come backs “Huckleberry Finn”, “Source of Happyness”, “Soldier Svek”, “Maus”, etc. I additionally like to read up on famous artists like Banksy, Saber and Shephard Fairey, who put together great art books without all the museum kiss ass mushiness.

Do you have spare time activities besides art?

Read, read, read. I usually read at least 1 hour a day on almost any topic: art history, history, novels, biographies or finance. I love learning about the markets and making more money via trading – its free money for nothing in my mind. Another passion is to travel. I enjoy seeing other countries and learning their art and architecture on the ground.

Can you tell us about a recently finished artwork?

One of my more important works I recently finished was “Daraa Drought Drowned by a Bloody Bath”. This entailed the revolution that arose up in Syria after the president refused to step down. It captures the long historical elements of the country for 1000s of years as well as a famous poet by Adonis – the premier poet in Arabic. He basically rewrote the rules of Arabic poetry writing.

Do you have a best or most successful painting?

I would say “303 Signatures”. It wasn’t the most technically challenging, but almost the hardest. It has multiple layers and my first attempt at Mandarin (which I don’t speak) writing over 80 characters in Mandarin and over 800 characters along the frame. It captures the Jasmine Spring with the Charter 08 summation. This document is asking for political freedom and rewrite of the Chinese constitution. I got immediate feedback by the Chinese party, who staged a propaganda art show in the yacht club next to my house.

What is the artist’s role in the world?

The artist is either a celebratory support of a regime as classically defined: court painter, art patrons, etc. Another definition, which I think is more in the modern definition is to redefine art in its time and reaction to the current technology. The impressionists came out as a reaction to photographic realism for example. Graffiti is on the cutting edge of many art styles as it is officially rejected. All cutting edge art is usually outright rejected at first, so that’s the first rule to create “art”.

How have you been selling your paintings?

I got my start selling artwork on eBay at low prices. On eBay you can sell quite a lot of art by selling commercially viable work and starting at a low price. After many sales you can move up. I then went to gallery sales as you can sell for $1000s the same painting that sold for $200-300 on eBay. I would have liked to continue on eBay if I could move up faster the price levels.

How do you market your art online?

My only real success online sales has been eBay. I did sign up on Etsy and other art sites online, but no sales have resulted. I think Etsy is more of a crafts style store and the other websites I don’t think generate sales or at least that was my impression.

Who has influenced you?

My influences primarily are current graffiti artists. I learn so much from the new color combinations , constantly changing style and immunity to the constant destruction of their work. I think Banksy and Shephard Fairey have shown the light as far as you can go with political artwork, which I believe is sorely under painted. The majority of political art is terrible, which makes sense as most galleries want to stock nice landscapes, portraits , still life’s and abstracts that sell well.

Banksy has the uniqueness of trying anything once and gathering unusual attention to his art in original presentation, which drives him as an artist.

Fairey is very subversive and political in his work as well as prolific to the extreme. He literally has bombed the world in his posters.

Can you recommend another contemporary artist?

The one I would recommend the highest is Banksy. He makes a point with each painting about the irony of life. This is so on the money its amazing. He shows the inconsistencies in public policy, policing, protection and societal rules that make a viewer instantly realize the truth of his image. A good example is hanging fake art in a museum to make fun of clients thinking only “this” is art when its really a lot of stuff rich people fight over in many cases vs. the real art value.

Please let us know something interesting in your life.

I remember the day the Berlin Wall fell I was in Poland behind the Iron Curtain and saw old men crying over the end of the Cold War and beginning of freedom for Eastern Europe and his country Poland. After living a year during the transition, I understood the importance of democratic freedom and the wisdom of small government in check. Most people in the West take this for granted, but even in the West we can fall into a dictatorship. Germany voted for Hitler and was in dictatorship in a few years. Always vote for freedom and be active politically.

What is your outlook in 10 years?

In ten years, I want to be able to sell art professionally and not have a day job. As an artist I want to have changed the direction of art with a newly defined art style, which is my definition of an important artist. Additionally, I would like to start to become wealthy from my art sales.

Advice for Aspiring and Emerging Artists

First thing, is check that you have artistic talent.

Second, determine how you are going to move the needle in the art world, you can’t just copy Mona Lisa and Marilyn Monroe endlessly.

Third, you need to understand how to market online and offline, which should be about 80% of your art time.

Fourth, get a great paying day job, which will cover you until you go full-time painting. You don’t want to be stuck in a boring, low-paying job because you studied art only.