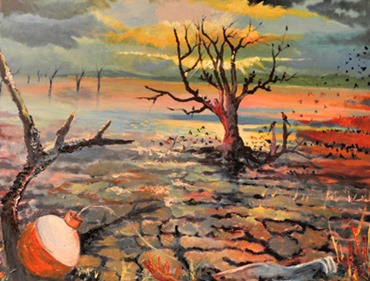 As I mentioned in the past, artists who have been previously featured at Artpromotivate are encouraged to submit an original article on their choice of topic.

Do you have a new series? What about an upcoming exhibition? (This would be a VERY good way to promote it!)

Want to tell others what you have learned for promoting your art?

Why not tell us all about it in your own words. Find out more details at this page: Another Spotlight on your Art 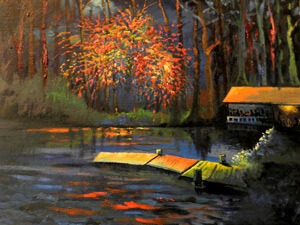 Being an artist is a long and amazing experience. It takes years to know what you want to say, how you choose to be seen and what exactly is your subject matter. For years as an artist I have strived for a purpose for painting the landscape without just painting happy landscapes - not that there is anything wrong with that. 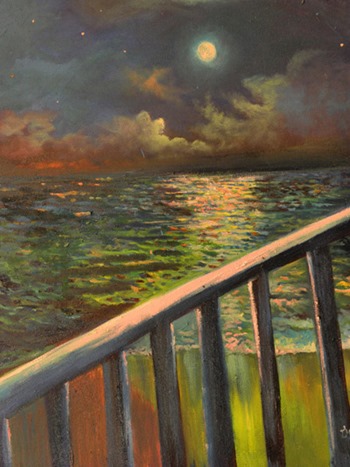 In the past I have wanted to paint wildlife, people and eventually found my connection with water and the night sky. I would consider myself a landscape artist that specializes in water and evening scenes. In the process of finding that look and feel I have explored with the idea of capturing realism and than twisting it just a bit - just enough to make the viewer feel not quite comfortable or having a question about the landscape that draws them in and they can make their own story from the process of bringing their own experiences to my paintings. I love the mysteriousness of nature and believe that is the idea of being uncomfortable; maybe the word haunted is a bit better.

In recent months with much building of confidence as well as a growing understanding of the vision I have sought, I have finally touched the surface of the look and feel that has been so intangible to me for all my time painting. I have experimented with putting people and wildlife in my landscapes without any fear of the failure I used to feel. My vision for my final product is stronger, even though at times it does change and grow to be something different than the original aspect of my reason for painting. I have filled notebooks and sketchbooks up with many paintings waiting to hit the canvas. The ideas and inspirations have come quicker than I believe they ever have and they have also become much more solid. 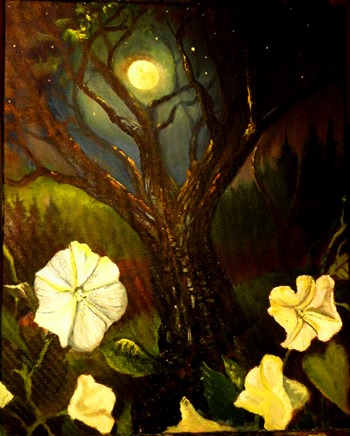 I just published twenty paintings on my blog, http://artbygordon.blogspot.com/ This was a culmination of years of paintings hanging on walls developing. I have had ideas that have floated around the studio or just in my mind for many years and just recently the clarity I have felt has been amazing.

The paintings are everything from a moon scene over a beach in Navarre, Florida to a dried up lakebed where old bobbers and glass bottles are seen as the water has receded. This image is called The Scavengers (image at top of article) with the idea of red winged blackbirds in the background being able to scavenge the dried up lakebed. It was amazing to me how the different images seemed to finish themselves and not only was I able to fill in the remaining paint but I also realized a story for most of the images.

Just on the heels of this series, I have started several more and rejuvenated almost fifteen new paintings - these will debut in the next few months as they are finished. These paintings seem to have taken up where the others left off. Of course the standard waterfalls that are my staple, one is of Turner Falls in Oklahoma. Another painting is a strange angle of the surf - it is almost an abstract painting because you usually don’t see the waves and colors in that perspective, above the ocean is clearly an image of several terns as they hunt in the waves giving a bit of a story to the painting and a perspective to where the viewer is positioned. I saw this image back in Navarre, Florida probably two or three years ago and it just stood for that much time as an under painting. 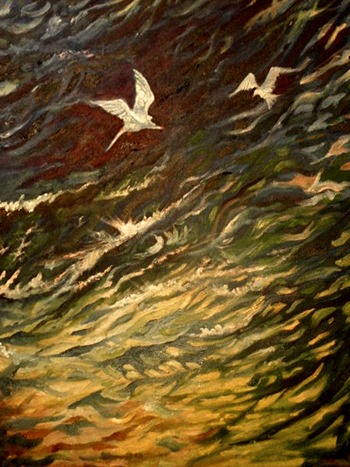 Another aspect of the change in perspective for the viewer is images looking up a tree to the night sky - this has been an idea I’ve had but have never actually attempted. I have moved from the standard view of a landscape to a position where the viewer is either awkward or just a bit off kilter - this will increase the tension which

I feel is important for my work and something I have strived to increase. I don’t want a viewer to walk away from my paintings cold, I want them to feel something, uncomfortable, sad, euphoric, something-even cold-but I don’t want them to feel nothing. I have had people comment that they are otherworldly-this is a welcome critique as they are anything but a standard balanced landscape.

One more image that is being finished and will debut shortly is an image of my son catching a bass, the first serious portrait I have ever brought to completion. I am excited about the detail and the fact that the background of the landscape is a second thought instead of the major focus, which is more the standard for my work. I have also picked up on a previous landscape of swallows, which are two in a series of the previous swallow painting from the recent series I released. 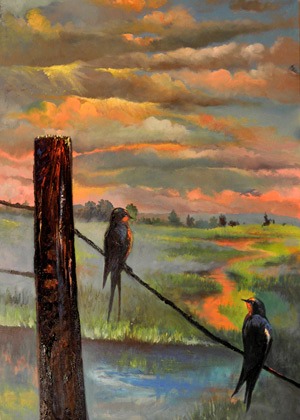 I feel like the options are endless and my confidence in painting whatever the mood decides is getting stronger.

I plan on many more paintings from the viewpoint of a kayak as well which is something my son and I have been doing a lot. One other landscape from a recent trip that will find its way to a canvas is the mountains and waterfalls of Yosemite National Park, which we visited last March.

I am also working on allowing for greater flexibility and use in website as I have been learning action scripts for flash and plan on eventually having an interactive gallery that viewers can walk through, it is a major undertaking but one I’m excited about doing.

As I said previously, being an artist is a long and amazing experience - I can’t even guess what’s coming next but I’m excited about the options.

Thank-you Steven! ~  Please visit him at: