Street Photography With Dignity - Diane Arbus Versus - Patrons of Art?

As is the case with any envelope-pushing artists who really lay their conscience on the line however, Arbus was by no means without detractors. In fact, an assertion that half of the opinions on her work are unflattering to say the least wouldn’t be far from the mark. One of those detractors wrote, “Arbus is one of those devious bohemians who celebrate other people’s eccentricities and are all the while aggrandizing their own narcissistically pessimistic view of the world.”

Another critic called her portraits (and the people in them) “assorted monsters and border-line cases…” and referred to Diane Arbus as “anti-humanist”. About her work in general this same critic said that she “shows people who are pathetic, pitiable, as well as repulsive, but it does not arouse any compassionate feelings.”

So who were these defamers accusing Arbus of being a devious, anti-humanist bohemian with the audacity to “celebrate other people’s [or monster’s] eccentricities” for her forward her career with cynical, exploitative shock value? Anti-arts crusaders? Ultraconservative AM radio hosts? Stuffed-shirt establishment types?

Well, the “devious bohemian” quote comes from Jed Perl from The New Republic, one of the most widely read left wing publications in the nation (The Nation… is another one). The “anti-humanist” condemnation comes courtesy of Susan Sontag- famed writer, critic, intellectual; photography analysis and criticism being one of her chief interests. Incidentally, Sontag was romantically involved with one of the few female (or male) photographers to approach Diane Arbus’s skill-level or renown, Annie Leibovitz. And Sontag’s son, David Rieff, contributed work to The New Republic. 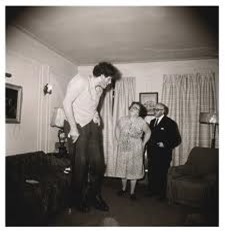 In their defense (sort of), Sontag and Perl are criticizing Arbus from what they consider a good place: “Diane Arbus is finding people who already have rough lives and further degrading them by putting their weirdness out there, highlighting it for cheap shock value- it’s cruelty and mockery.”

An argument could be made that imprecations like those made by Sontag and Perl say more about the imprecators than the impricated. Eddie Carmel, “The Jewish Giant”, wasn’t “a monster”- he was a regular guy stuck in the body of an 8’9” circus sideshow visiting his parents in the Bronx. Arbus was roundly criticized for saying that this picture struck her as poignant because of its suggestion that Carmel’s mother was staring up at her child in horror.

Is it wrong to photograph someone in a situation that seemingly uncomfortable, in this case suggesting that perhaps even Carmel’s own mother was disturbed by him (although I doubt she was)? Eddie Carmel died from his gigantism within a year of this photograph’s being taken. His life was awkward and uncomfortable, no doubt. He worked as a circus performer and villain in B-movies because of his great size. Does showing Carmel doing what non-monsters do- visiting with his parents- make him a monster? Is simply shooting a picture of someone different an exploitation because that photo accurately reflects their difference? 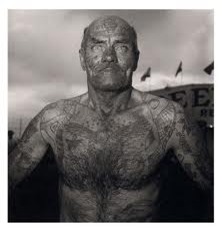 I don’t think so. The backlash against Arbus’s work is more about her contemporaries in the 1950s, 60s and 70s being reminded that transvestites, homosexuals, the exceptionally tall and other marginal types existed. The discomfort with, pity for or disconcertion resulting from viewing Arbus’s work isn’t an indication that the objects are being put in a position where they elicit those reactions as much as it is an indication how the viewer feels about the obviously different being shown as they are rather than made caricatures, sugar-coated characters or not shown at all.

Diane Arbus taking candid shots of her subjects (a great deal of her genius being the ability to make every shot candid), reflects an honest and un-coerced recording of life from an empathetic artist. Not only do her circus performers (unabashedly “circus freaks” back then) not look particularly exploited, most seem downright willing and even happy to be captured.

(Of course, one could argue that “circus freak” would be a very strange career choice from someone who didn’t want to be noticed.) And there’s nothing I can see at least to suggest that Arbus captures her subjects in any manner but lovingly.

If an argument were to be made for Arbus’s shots being unflattering, arguably the best shots a proponent of that tack could cite for evidence are those of pro-Vietnam war demonstrators. For instance, compare her famous portrait of a smoking transvestite in rollers with that of a young Vietnam war supporter: 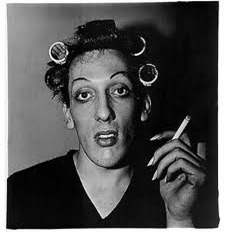 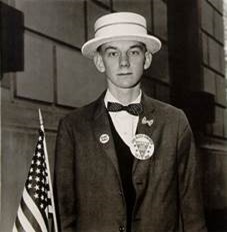 While they may initially seem superficially alike- shots of marginal characters- the transvestite seems confident and even defiant: he knows who he is and is comfortable with it even if no one else is. The protestor on the other hand seems anything but confident and/or comfortable. 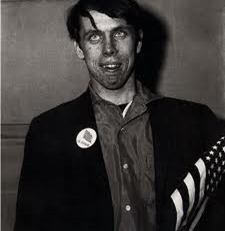 His straw boater and bow tie feel incongruous, striking one as more an unhappy (and perhaps angry) young man effectuating the unnatural, uncomfortable, antiquated and ill-suited look of a much older man. He’s stiff, rigid and ill-at-ease, although he may be fairing better in general than another pro-war activist:

It seems to me that the awkward, wide-eyed, manic and even possibly unhinged flag-waving protestor here is more unsettling than any of the “freaks”. As manic, unhinged statements about war go, none is better known than her “Child With Toy Hand Grenade in Central park, New York City”: 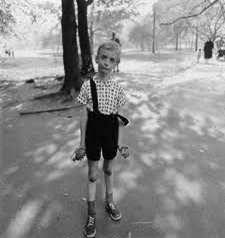 The (in)famous photo has been coopted for any number of album covers, graffito-subjects and scholastic deconstructions and analyses. It makes sense- on the most basic level it’s just a kid with a “come on already!” fit of youthful impatience (which Arbus revealed was the impetus for his expression). On the other hand, of course, maybe it’s a disturbing question mark/exclamation point about America’s infatuation with war- a country where the lunatic children play with killing devices. In that nuance, “Child With Toy Hand Grenade” is like so much of Diane Arbus’s work- far too complex to be simply dismissed, or embraced, wholesale. They should be graded on their individual merits. As for the pro-war protestors and the kid with a grenade - what liberal writer or intellectual can take issue with anti-war statements?

All photos property of the estate of Diane Arbus, much thanks for their use here.

”Amy Cobb feels most at home behind a keyboard or a snapping shutter. She's a Jill-of-All-Trades media refugee turned blogger who, since jumping ship from the Fourth Estate, blogs on all things media and media-education-related. Most recently she's worked on cataloguing the best photography colleges. When not writing, Amy is thwarted by square foot gardening or playing with her Cavalier King Charles Spaniel, Snarls Barkley.”