Quebec, Canada, now for a while in Sibiu, Romania, Europe.

Favorite Quote: “Writing is a form of therapy; sometimes I wonder how all those who do not write, compose or paint can manage to escape the madness, the melancholia, the panic fear which is inherent in the human situation.”  Graham Greene, « Ways of Escape » 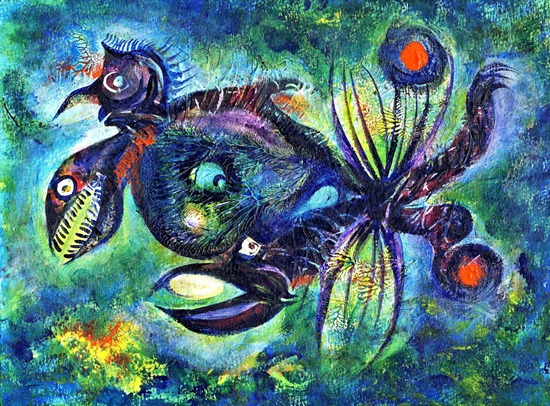 Ion Vincent Danu is a Canadian visual artist of Transylvanian descent. He started painting when he was 11-12 years old, passed his teenage years happily (yes, quite unusual, eh?) as a artist apprentice in his hometown of Sibiu, then for more than 25 years was anything but a painter. Immigrated with his family to Canada at the end of the nineties and after a short while started again drawing and painting. Which saved him from a bad depression and made his impervious to unemployment (since he was always employed to draw and paint), poverty, anonymity and death. Eventually, post-mortem, he will be rich and famous too but right now he is quite happy to be able to draw and paint and take pictures.

I still have (and greatly value) a photo of mine (taken by an uncle) when I was 5-6 years old. I was sitting at a table, with a pencil and a sketch book and was day dreaming about something. At 11 I found by chance Van Gogh's Letters and a book by a French Writer, Francis Carco, Les artistes Maudits (The Accursed Artists) and, contrary to my father's will (but sustained by my mother) I applied for The Art High School in Sibiu. My artist destiny (even with the 25 years or more pause) was settled. Since 1999 I know this is what I want to do with the rest of my life. 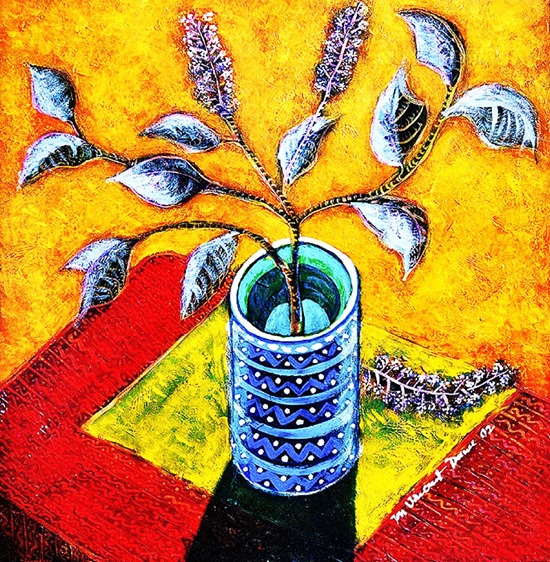 Usually I listed to Quietude and Oasis, two tunes of Holosync or to Mozart or Bach. Sometimes, jazz (Avisai Cohen, Remembrance) or Vangelis...

What jobs have you had?

I've teached artistical expression (acrylics and watercolor) to catholic nuns in a private institute for 10 years. But I've also worked in a Call center when times were hard. Strictly to pay the bills.

Is there anything you are trying to convey to viewers through your art?

I'm not trying to convey them anything, specifically. I'm not the intellectual, conceptual type of artist. I just paint (sometimes, not too often, I do it quite viscerally) and paint and paint some more. When I don't know what to add or erase it means it's done. It happens also quite often that I draw and paint conventionally. Masterpieces and heavy stuff are not everyday stuff for no artist I know. They would cut their ears more often, otherwise. 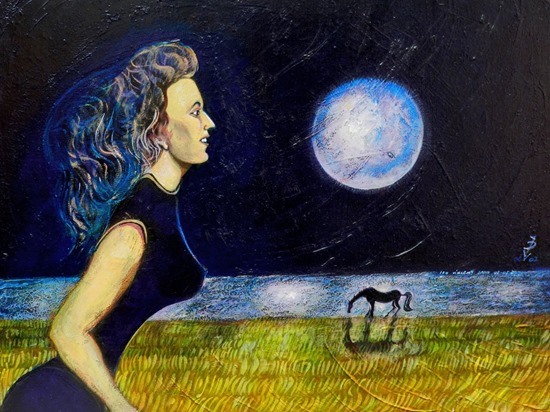 If it's not a commission (like a portrait etc) I start by preparing my canvas, painting a colored background in a strong color. I do create some textures (usually with heavy acrylic gel) and then I paint and paint and paint until, usually, the painting starts to give me suggestions, becomes to resemble to something (serpents, birds or people, usually) and I continue to paint in the sense of the painting until it's finished.

Sometimes and image, sometimes a nightmare or a dream I cannot remember. Sometimes an expressive photo. It happens quite often that human faces inspire me too. 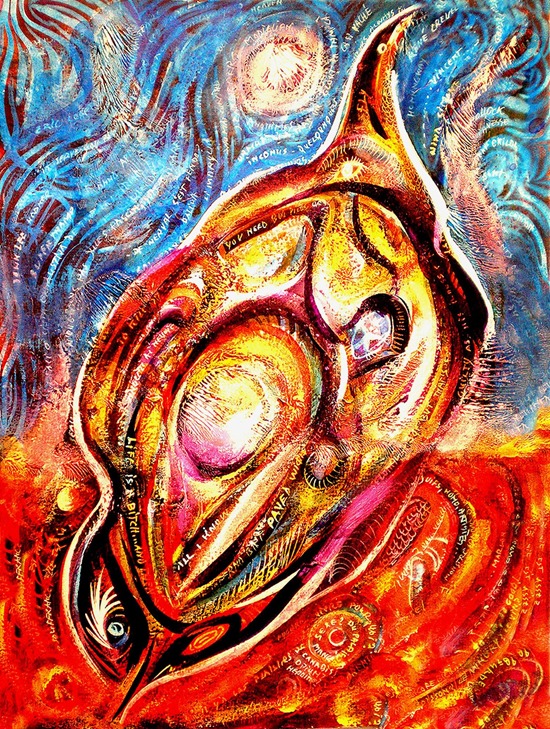 Not that many and not that important. Most important was the retrospective I had in 2006 at the Creation Magog, an artist managed association I was a member then. In 2007 the city I lived for the last 15 years, Sherbrooke, Quebec gave me a prize so that I finish a project of mine (doing 100-150 portraits of all kinds of people from Sherbrooke and choosing the best 50 to make a DVD; which I did). Lots of other collective exhibitions but not that many since I kind of lost interest, at the time, in promoting my art. I do have a presence on the Internet, on free (or less free) artist sites like Fine Art America, Redbubble etc.

Have you sold your art and how?

I've sold some, I gave in exchange others and give away a lot of them. Most of them are still with my kids and wife. How I sold them? By chance, sometimes during exhibitions, a few on the net. Not a big seller, though. Not enough time invested and especially not enough ambition to sell. The important part, for me, is simply drawing and painting. Selling – well, that's collateral benefice. Even if, of course, some $ and fame would be nice. I could buy the best materials and more time to paint. 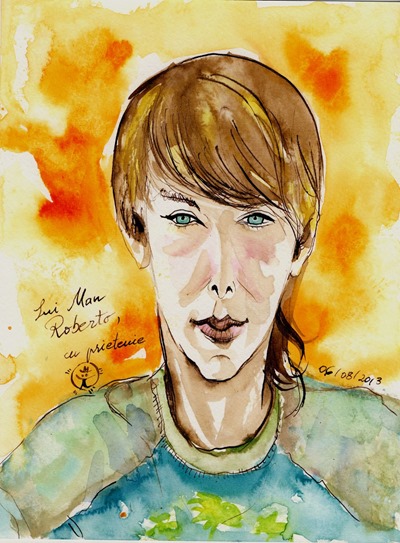 How have you been promoting your art online?

The usual way, Fine Art America, Saatchi online, Deviant art, Redbubble, my blogs etc. But I'm not a very convinced Internet fan (it's useful but not nearly as much as they usually say...) Very few paintings or reproductions sold over the internet. Could be my own fault, mind you. It seems that the real collectionners, the rara avis that could change your artist life, are not using Internet that much. Just an impression.

Lots of painters I love : Van Gogh, Matisse, Pascin, Modigliani, Lucian Freud, Delvaux, Francis Bacon, not to mention (well, I am mentioning them!) the classics : Titian, Rembrandt, especially Pieter Brueghel the Ancient and many many others. Some Romanian painters like Luchian and Tonitza and Andreescu are very important to me, too. But I'm not sure about the influences they had on me. I just like them a lot. And probably forgot a lot of them... 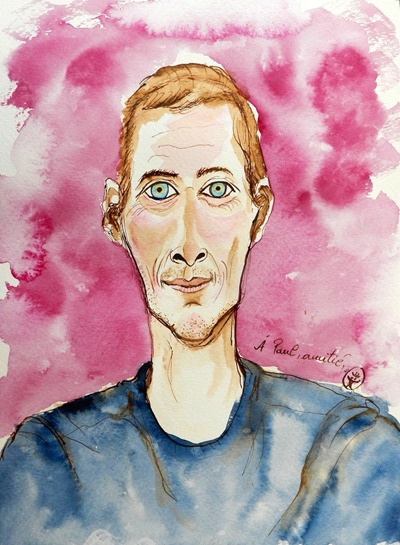 Tell us something interesting events from your life.

One of the most rewarding and pleasant things I did (still do) as an artist is doing portraits on the street or in a restaurant. Not earning a lot but meeting a lot of interesting and sometimes beautiful characters, children, women, men. I did a bit of portraying in a lot of interesting cities, in Vienna, Sibiu, Paris (but there the « fellow artists » and the police were kind of unusually nasty), before the Pope's Castle in Avignon, Edinburgh and of course, Sherbrooke, Quebec. Doing a portrait in 20-35 minutes (not a sketch but a finished watercolor) is something I've always valued as exhilarating.

A video of me doing that on You Tube:

Who hasn't? I remember one of the very few time a portrait I've made was refused because the person (a 70-80 years old lady) said it did not resembles her (it did and a lot but I couldn't eliminate ALL the wrinkles she had; only about 75% of them...)

Yeap, I would avoid the 25-28 years gap when I didn't draw or paint but occasionally, to make anniversary presents for my mother...

Not a big planner myself (I know it's not what you want to hear, probably, but I cannot lie either...) My only plan it's a very simple one : I will continue to draw, paint, take picture for as long as I live... no matter what.

Spend most of your time creating your art, and do it as well as you can. And take Artpromotivate advice for the rest of 10% of your time. But inverse the time proportion if you want only fame and money.