Elynne Rosenfeld Artist - The Angel is in the Details 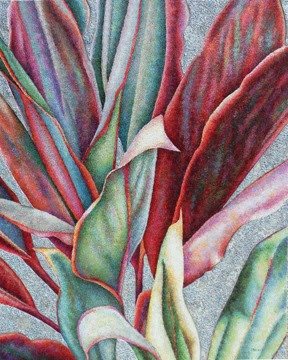 Favorite Quote: “Your journey has molded you for the greater good. It was exactly what it needed to be. Don't think you've lost time. It took each and every situation you've encountered to bring you to the now. And now is right on time.” - Asha Tyson

I believe that total abstraction done well is really the same thing as figurative work.  Some see meaning in one, others in the other.  I explore the transition between figurative and abstract painting in the compositions of my current series, Succulents.

Can you tell us about your first experience creating.

My first experience creating was as a two year old, pad and pencil in hand.  I don't recall a single experience, only that I was always drawing when I could get my hands on these two objects.  Very early on I was creating visual narratives filled with people and their settings. The settings were often the stuff of my own fantasy.

What particular music do you listen to when painting?

Generally I toggle back and forth between classical chamber music and the blues.  There are a few piano concerti and symphonies I like, notably anything by Mahler, Bartok, Mozart and Schubert.  I also enjoy classic jazz, however. 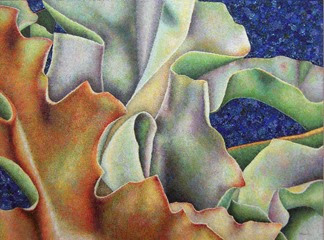 While I don't have a 'job', I do practice the healing technique of Reiki at the master level, and write the occasional article for Reiki News Magazine.

Most recently an article entitled "Reiki Inspired Art" (Fall 2013) featured six artists who infuse Reiki into their visual art with the intention of creating a healing atmosphere for the viewer.

What are you trying to convey to people viewing your art?

I wish to offer a positive message, so that viewers feel better for having seen the work.  I know that sounds pompous,  but it really isn't.  I think much of the art embraced today attempts to shock and/or horrify. To raise consciousness at a deep level art needn't do that.  I want to provide a visual that gives the viewer something from very close as well as at a distance.  In life, when we see something that has meaning for us we get closer and spend more time getting to know it.  I try to make my art inviting to the viewer, and once invited, I hope the viewer will want to return, going deeper and deeper.

My succulent series begins with photographs I take of botanicals.  I enjoy strange camera angles, very close in, paying attention to the interplay between specific leaves and the metaphors they present. From these arise finished prismacolor drawings, and after a spate of drawing I decide what I want to commit to canvas.  The painting process is quite slow.  I apply layered spirals of acrylic paint in a meditative repetition until all the elements click into a finished piece. Interspersed with the leaf imagery are hand-applied beads and/or beach glass, which lend a counter texture to the spirals.

What inspires you to paint?

I have been inspired by many natural forms, including tree trunks, rainbows, leafy plants and even people.  But I am also moved by architecture. I love bridges, gates, doors and doorways though usually they cannot be found directly in my work. 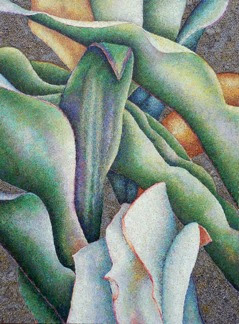 I have shown at Woodmere Art Museum, Paoli Cancer Center, several galleries that are sadly now defunct including JMS Gallery in Chestnut Hill and ArtForms Gallery Manayunk where I had three solo shows.

There have been around 100 group shows over the years, and a dozen solos.

Currently work is on display at the Transfer Station in Manayunk, PA.

Have you been selling your art?

I have sold artworks.  Some through exhibitions at galleries, some privately. There are a few staunch collectors who each own something of most of my series.

How do you promote art online?

I have been a member artist of Manhattan Arts International for the last six months.  I have participated in a few of the more reputable online juried shows, including those by Renee Phillips of Manhattan Arts, and John Math of Light, Space and Time.  I have an active Facebook page, an ever-evolving website, and I post frequently on Twitter, LinkedIn and Pinterest. 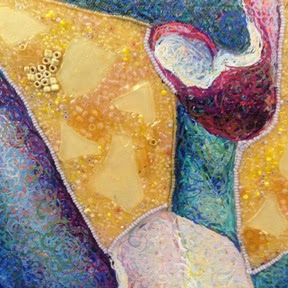 George Seurat: seeing his work in History of Art and later in museums instilled interest in layering color to form space.

Richard Poussette-Dart: his visionary abstracts in thickly layered paint speaks volumes to me.

Wayne Thiebaud: Mr. Thiebaud was an artist in residence where I went to college.  I am highly influenced by his color theory. He was once passing by my locker as I was putting away a painting I was working on, and said he liked it very much.  A seminal moment.

Georgia O'Keefe: I love her individualism, and her macro perspective.

Andrea Mantegna: I bought a book of his art in Woolworths for $1.99 and have never been the same since.

Joan Mitchell: a great colorist with amazing sense of space and surface.

Christian Marclay, whose 2002 Video Quartet can be seen on YouTube. In 2006 at the Whitney Museum's 75th anniversary exhibition, I was privileged to see this video as it was meant to be seen-- projected simultaneously with four images at once, moving through decades of film and music in 13 minutes, poignantly, humorously and with great love and reverence in what seems at first cacaphonous, yet makes perfect sense.  I stayed to see it three times.  I believe it is now permanently at the Tate.

Tell us an interesting story in your art career.

Once, as a young and inexperienced artist, I showed up at a gallery in a business suit and heels. The gallerist ignored me, busily on the phone. I leaned my large portfolio against a table and looked around at the art. At some point after she hung up, the portfolio fell over, making a loud thud.  I bent over to pick it up.  She said "Don't worry about that. It's just some artist's".  With a raised brow, I stonily countered "Yes. Mine." It was an interesting way to get represented by my first gallery.

Do you have any embarrassing moments?

It has always been embarrassing (though I am not sure for whom it ought to be MORE embarrassing) when I have taken 'come back later'  literally, and shown up at the precise moment that an art dealer had proposed, only to find her/him bewildered, and with no acknowledged memory of the appointment.  This has unfortunately occurred several times over the years.  And yet we are often advised to be persistent.

If you had a chance to do it all over again, would you do anything different?

In a way there is good in not knowing. That said, right now and for the immediate future my work is being shown at the newly opened Transfer Station. 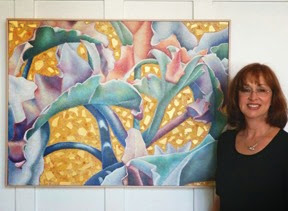 Do not turn down any opportunity or venue to show your work.  Each leads to another. Do not count rejections. They are ultimately meaningless. Instead keep track of your successes, and always feel grateful that you were given a gift of expression.