I have started a series of paintings on Indian classical music, which depicted by the miniature artists of India, at the historical period of Mughal era. I was curious to see some samples of this long series of paintings, and try to find out the hidden background of this series.  I found some references from a book wrote by the formal principal of government collage of art and craft, named Krishnalal Das, and after searching these reference books, I have discovered a unique concepts of Indian classical music which inspired to those miniature artists to create this series. It also inspired me, and I have started again to depict this musical series. 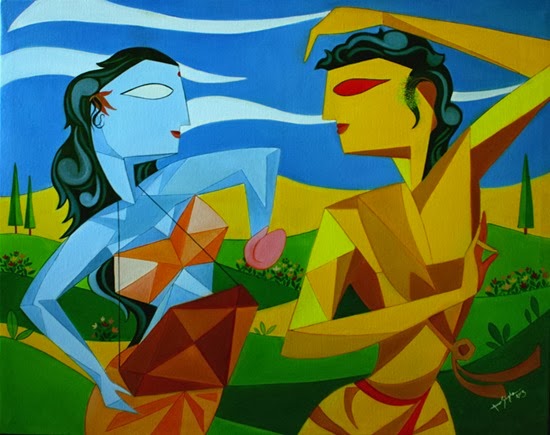 Each rhythm has a specific moment and season, for singing. As an example, Sri-Raag. It is the first rhythm of Indian classical music. The time of singing of this Raag is at 3pm to 6pm, and the perfect season is just before the cold season. Sri Raag is looking very romantic and handsome. He likes to wear a flower chain on his neck. The name of his first wife is Malasree. They meet in a flower garden for collecting flowers. Sri-raag joked sweetly with his first wife. Authors believe that all rhythms are created by almighty creator for his worship. Rhythms are always holy, and it has a spiritual purity. 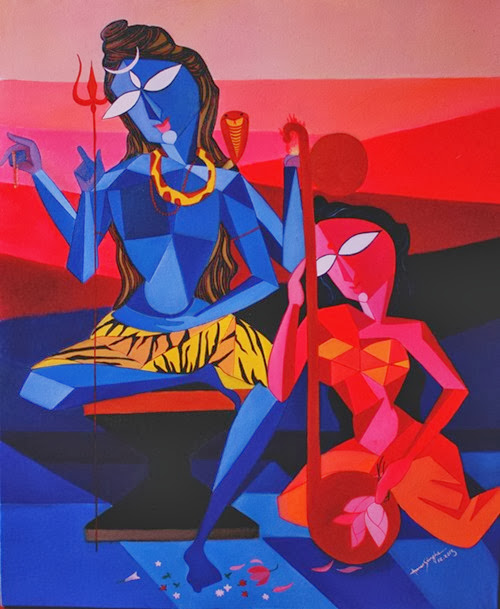 What is the meaning behind this type of conception? We know that every musical tone create a unique feeling in the human mind, and it is fact, that human mind is always imaginative. By hearing a particular rhythm, we feel and realize what this rhythm wants to say, or why this rhythm is created. Here is the unique matter; those authors of Indian mythological scriptures not only felt specific rhythms, but by their feelings, they created a human like model of specific rhythm, which perfectly matched with that rhythm.

At the mid of the historical Mughal era, when Emperor Akbar heard Indian classical music, he became interested in it and wanted to know more about Indian music. But he was completely illiterate.  So he ordered to his artists to depict these rhythms, by following the descriptions of those mythological scriptures.  Actually his interest was what is in those books, which he was unable to read. His artists started a long series of paintings by following all of those books and had created the world’s first musical series of paintings.

This series was created by the miniature artists of Rajasthan, and Kangra valley (northern Himalayan valley). In those paintings, they perfectly brought the actual effect of a specific rhythm. They mainly used natural colours or tempera.  Sometimes they used golden dust to frame a painting or in female dresses - for decoration. They broke colours in three steps, and created various shades by mixing them depending on the specific mood of the depicted rhythm. Like as musical scales (G-Sharp, B-flat etc).  Some of these original paintings now reside in Indian National museum of Delhi. But, it is a fact that many pieces are totally lost from India, but a few paintings are in a London museum. 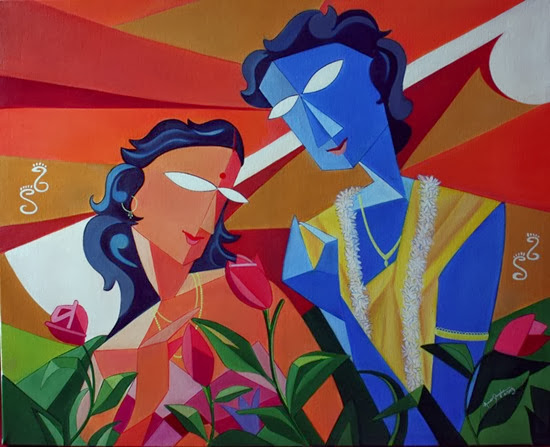 When you observe these paintings, you have no need to know which time or season is bearing this musical painting, or which time is perfect for this rhythm. It will touch your mind automatically by its powerful expression.

I have started my musical series for the second time by following same method, but I don’t know if it may be in right way or not. But I am enjoying it. I completed three paintings. It was about the first, second and third rhythms. First rhythm is Sri-raag. Second is Basanta-raag, third Vairaba-raag. I decided to depict main six rhythms. I also started a discussion in my blog in detail by following my painting. You may visit my blog, and enjoy my paintings and articles.

My blog address is – http://amarpainter.blogspot.com. Thank you for reading my article, and I also give a special thanks to Mr. Matthews, for allowing me for this guest post.