When did you first realize you were an artist?

There is not really one significant time that I realized I was an artist.
I am very much a believer that everyone from childhood is an artist; the problem for most people is how to remain being an artist into adulthood. I knew that I was good at art in particular painting during my school years, receiving the annual art & crafts award at age eleven in 1979 receiving a plaque and my name engraved on the school shield for that year. Then in senior school I earned the highest grade achievable in my ‘O’ level exams at the age of sixteen in 1984.

If I had the maturity back then that I have now, I would have made the decision to continue my art education; however I was not mature enough to make that decision. I was encouraged into a job repairing computers, but all the time I dreamed of being an artist. In 1991, I made the decision to take an evening class for my ‘A’ level Fine Art qualification. I continued repairing computers, and still did not take up painting as a career choice. Then in 1997 I was struck with depression and started painting again. It was perhaps then that I realized that I must become an artist, That I would never be happy until I became a professional artist. 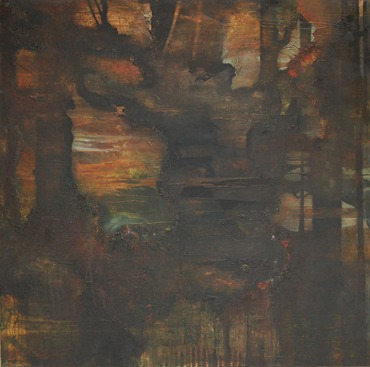 I spent the next ten years teaching myself to paint, Then in 2007 I embarked on a Bachelor of Arts honours degree in Fine Art Painting and Drawing. I graduated in 2010 with a first class degree from the University of Northampton, England.

I am now I suppose what you might call an emerging artist seeking to find representation in a reputable gallery. I suppose the greatest achievement that I would like, is to have a book written about my work. When that happens, I will know that I am an artist.

I always find the use of the word style in relation to art a bit hairy. Styles in my view tend to suggest eras in time. Putting this into context, it might be easier to think of an artists style to be that which exemplifies a period of time. Just as you can visualise the styles of fashion from say the 1950s too the 1970s for example, if I painted in the style of those times I would perhaps be an abstract expressionist. Much of the work I produce is informed by the abstract expressionist epoch; however since graduating from university, my work is in a transitional period taking onboard the contemporaneousness of digital and new media approaches to art. The work I am producing right now, I might call post conceptual abstract expressionism. Perhaps my audience would be better placed to label my work with a style… 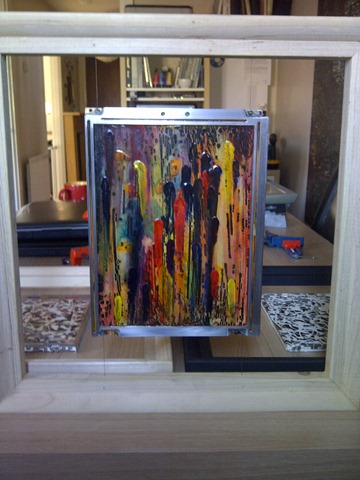 I have been brought up on the tradition of oil on canvas, but during university, I learned to shake that tradition up by experimenting with a much wider use of modern day materials. Whilst I desire to remain faithful to the tradition of oil painting in an attempt to continue the discourse of painting as defined by the history of art, I now use materials such as Ink, PVA glue, photographic and digital imagery, acrylic and oil paint on substrates such as canvas, but more lately computer components like LCD panels, hard disk drives even central processor units.

The use of computer based substrates is still very much in a kind of study period, as I am working out my frustrations of not fully realizing my true calling to be an artist over that of a computer repair technician. To summarize my use of materials, I tend to label my media as ‘mixed media and oil on canvas, or mixed media and oil on LCD panel, etc.. However I do intend on returning back to the tradition of oil on canvas but only after I have satisfied my current concerns of painting in the light of digital technology. I hope that by going through this period of study something new can be injected into the age old tradition of oil painting…

In a nut shell, paint versus technology. However on a deeper level, my work has evolved out of the thematic of the natural landscape such as woodlands in juxtaposition with the urban landscape epitomised by technology. Paint has innate qualities due to its plasticity which are organic even amorphous, much like nature, in the meandering asymmetry of growth and transformation. Technology tends to be much more linear and predictable. The main theme which comes out of this way of seeing is the contention between the natural and the man made.

My techniques are very much determined or biased toward the naturally occurring or organic processes which occur with the media that I am working with at the time. There are predictable chemical reactions between water based and oil based media, but the results of mixing these media can become very unpredictable. 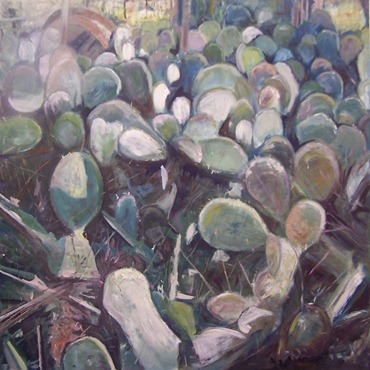 I suppose my general technique is to switch between unpredictable processes such as pouring, dripping, scrapping, and then a more traditional controlled predictable approach with brushes and pallet knives. Much of the time, I find that the uncontrollable qualities of my media push you out of your comfort zone, not being in control yields results which can be both desirable but yet at other times disastrous. When disaster strikes, I find that my creativity is put to the ultimate test. It is at these times when I am not entirely in control that my most satisfying work is produced.

There are so many artists that have influenced me in so many different ways, I could fill a page. The first that come to mind are Gerhard Richter, JMW Turner, Graham Crowley, John Constable, Dan Hays, Caspar David Friedrich, Michael Porter, Jackson Pollock, Frank Auerbach, Mark Rothko, the list goes on in my appreciation of artists…

Where do you get your ideas?

There is no easy answer to the question of where my ideas come from. It is like asking how my brain works. The best answer I can give you right now at this moment is; life experience. My ideas come from everyone and everything around me. I just never know what idea is going to come to me next or even where the idea came from.

An idea is just an unsubstantiated thought, there are an infinite possibility for ideas, however until an idea is substantiated by constructing it with a means of communication such as art and in my case painting, the idea is just that, an idea… 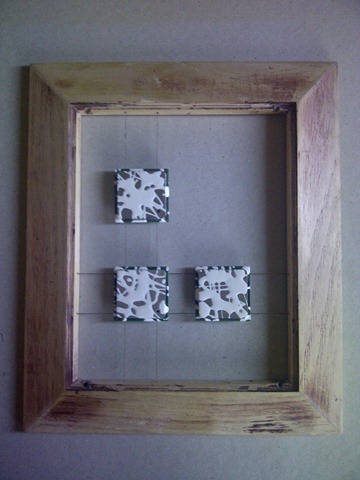 Why do You Create Art?

How often do you create?

As often as I can but not as much as I would like.

What role does the artist play in society?

In my view, an artist shapes the way we see the world and contributes to an ever evolving cultural awareness through the work he or she creates.

What is the best artwork you ever created?

That seems like an incredibly difficult question to answer, but as of now, I would have to say the very last artwork that I made and that is CPU Painting no.01 of 2012.
There have been other artworks that I made which I might have called my best work, but it really only makes sense that my last work encompasses everything that I have learned about art. At the same time my best art is not necessarily my favourite art…
Often I have found that some of my less well executed work has a naïve charm about them which is pleasing.

No not yet… Would you like to buy one of my paintings?

Can you recommend a contemporary artist to us?

Michael Porter is a contemporary artist that many people might not know about. Michaels work is very much about nature. Not in a traditional landscape frame of thought, but more about the immediate surroundings of his environment, not the big picture too the horizon, but the very ground he walks upon, whether that be in Shinning Cliff Woods in Derbyshire, or The rock pools in Newlyn, Cornwall. Michaels work influenced me greatly in my second year of university. If you are drawn to nature you will appreciate Michael Porters paintings… Michael Porter 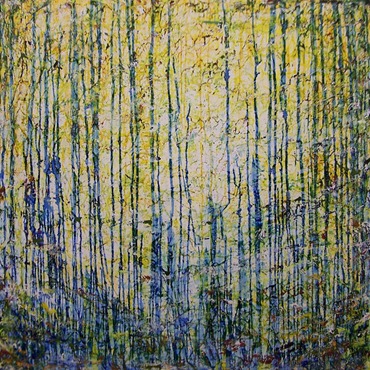 The first art competition I ever entered was the 2008 Wellingborough open. Although I was still in my first year of university, I entered a painting called 'Arboreal Melody in Salcey Forest' into the professional category. I won first place best professional and my work is now in the Collection of the Wellingborough county council. It was a purchase prize of which bought me lots of desperately needed painting supplies for my studies...

Yes, but I know that I never will or even could…If I gave up art I may as well be dead.

Where do you see yourself as an artist in ten years?

I can see myself sitting in a 100 square meter studio with big enough doors to get the huge paintings that I need to make out. It’s a far cry from where I am now in the corner of my living room with my desk and part of the dining table for a studio. My creative mind is boiling and I am screaming out to be able to finance a factory unit studio…

Don’t worry if you think you have messed up a painting, it just means that you haven’t finished the painting yet…

Would you like your art featured at Artpromotivate in an artist spotlight similar to this one? Please visit our page Artist Spotlite for all the details. If you know of an emerging artist who would benefit from being featured here, please let them know about us! Thank-you!