Rembrandt - Inspiration From the Master Artist 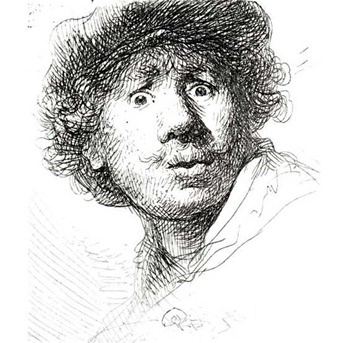 Rembrandt van Rijn (1606-1669) was a Dutch painter and etcher who is considered by many to be one of the most influential printmakers and painters in European history. He was born in Leiden, in the Netherlands. During Rembrandt’s life, he created over 1400 drawings, 300 etchings, and 600 paintings.

There are few artists that have affected my art more than Rembrandt. I’ve always loved his use of chiaroscuro, the natural blending of light and dark to create a dramatic effect. Also, I’ve often been inspired by the many portrait paintings, drawings, and etchings he completed throughout his life.

Rembrandt painted and etched many self-portraits during his life-time. These not only depict the artist at several stages, but also document his progression as artist. They were sincere visual depictions and serve as a biography of his life. His early etchings and drawings show experimentation with facial expressions (see the self-portrait above). 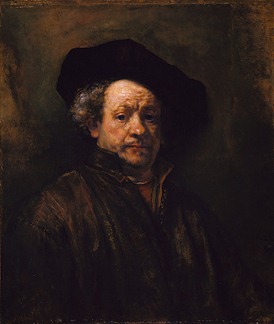 Like many artists throughout history, Rembrandt had many financial hardships during his art career. In 1639, Rembrandt with his wife Saskia, purchased a house in Amsterdam for 13,000 guider on a mortgage. Not able to pay the mortgage, Rembrandt filed for bankruptcy, and his house (now called Rembrandt House), along with his art collection were auctioned publically.

Rembrandt also had several personal tragedies, including 3 of his 4 children dying within months of birth. His wife Saskia died in 1642, a little after their only surviving child Titus was born.

I am inspired by the way Rembrandt created art even during times of hardship. Actually some of his best pieces were produced during personal tragedy and strained finances.

Rembrandt – Compositional Principals in his Paintings

Rembrandt liked to paint about stories and pivotal events from the Bible. These paintings are actually some of the first I have been exposed to as a young child. My parents had a large family Bible including several narrative paintings by master artists at the center, a few of them belonging to Rembrandt.

Here are some painting and design principals I have learned at an early age from looking at Rembrandt’s paintings.

Have you ever been inspired by the famous Dutch master artist Rembrandt van Rijn? What is your favourite artwork by Rembrandt?