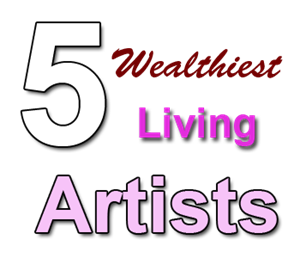 Making a fortune as an artist is not an easy feat.

But as this list shows, it can be done. There are very few artists that amass great riches in this lifetime, while the vast majority live below poverty level, or support themselves with other jobs.

Being one of the wealthiest artists in the world does not necessarily mean they are more popular or influential in the world of art – or even a better artist.

I truly believe that some of the best artists do not make near the amount of money that these do.

5 Richest Artists in the World Today

Other artists that trail close behind these as the wealthiest living artists are Takashi Murakami, Anish Kapoor, Gerhard Richter, David Hockney and Cindy Sherman.

What are your opinions about these artists?

What do you think it takes to become one of the richest living artists?