The Works of Michelangelo - Sculptures and Paintings 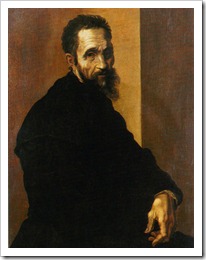 There are very few artists who have had as much influence on Western art as much as Italian Renaissance man Michelangelo di Lodovico Buonarroti Simoni (1475-1564). Michelangelo was a genius in his time, and also one of the few artists who lived to see great fame and wealth. He was a master of many art forms, including poetry, engineering, painting, architecture, drawing and sculpture.

He also produced some of the most famous artworks ever – the marble statue of David, frescos on the ceiling of the Cistine Chapel, Pietà, Laurentian Library, and the dome of St. Peter's Basilica.

Michelangelo also has the distinction of two biographies published about his life during his lifetime – a first for any living artist. 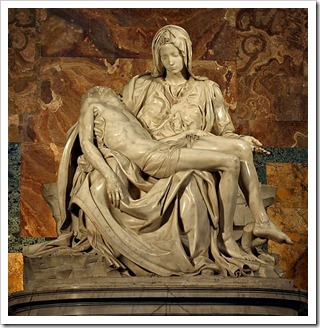 Michelangelo created Pietà (1498) at the young age of 24. It shows a masterful depiction of Mary holding the body of Jesus following the Crucifixion. The figures are very lifelike, and the depiction of clothing is especially realistic.

The marble sculpture can be seen in St. Peter's Basilica at the Vatican. The piece was one of Michelangelo’s most highly finished pieces and propelled him to super stardom.

It was also the only artwork he ever signed. 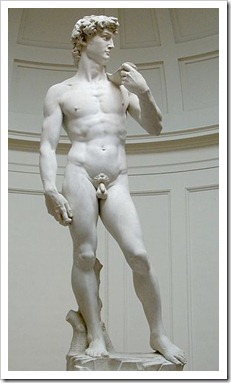 From 1501-1504, Michelangelo carved the marble statue of David, based on the Biblical story od David and Goliath. He obtained the commission for this piece when he was only 26! The piece was created from the unfinished project of another artist years earlier.  Michelangelo was from then on recognized as an extraordinary sculptor with imagination and skill.

The marble statue was to symbolize freedom in Florence. Today, with all the reproductions at resorts and casinos, Michelangelo’s David has become a symbol of human culture.

The statue of David can be viewed at Galleria dell'Accademia, in Florence, Italy.

Several copies can also be seen at locations around the world, including the Victoria and Albert Museum (V&A), London, England (where I saw it in 1997). 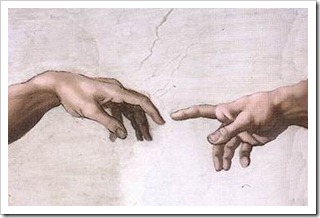 In 1508, Michelangelo was commissioned to paint the ceiling of the Sistine Chapel, in a medium he was unfamiliar with. The original commission was him to paint scenes of the apostles, but he lobbied for a larger, more complex plan for the ceiling – displaying scenes from both the Old and New Testaments. The project was enormous in scale and grandeur, containing 300 figures.

The central part of the composition contained stories from the Book of Genesis – Earth’s creation, creation of humanity, and the time of Noah. The most famous part of this composition displays the finger of God and Adam touching, an image which is commonly seen in pop culture references.

Michelangelo went on to create many other masterpieces, including The Last Judgment, statue of Moses, dome of St. Peter's Basilica, Medici Chapel, and much more. The scale of Michelangelo’s contribution to the art world is staggering. Most of his sketches, artworks and writings have survived, making him the most documented artist of his time.

Michelangelo was a man of extraordinary genius and talent, and is widely recognized as one of the greatest artists who ever lived.

What are your thoughts on the great historical artist Michelangelo? Have you ever seen any of Michelangelo’s masterpieces in person?