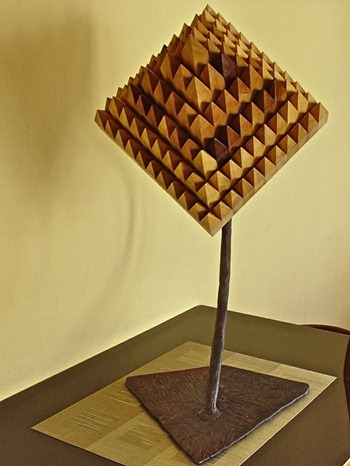 The Depeche Mode of woodworking. (Get their best of album and you’ll get it.)

I participated in the Silicon Valley Open Studios (SVOS) 2012 summer show for the first time, and had to cart my work around without damage, buy a guest book and sit while the public viewed my works. So many people smiled when they saw my work, and that was gratifying. Thinking about the large group of artists in the show, me included, I have to be an artist!

My style is driven somewhat by tools I have selected to make my wood collages. And mostly my style is modern abstract. My latest theme is the Cosmos, our universe. I am fascinated by the randomness of space and its inhabitants. My process usually, is think of a subject and interpret it in wood, the ‘Big Bang’ piece I made is an example. (2’ X 4’ X 6”) 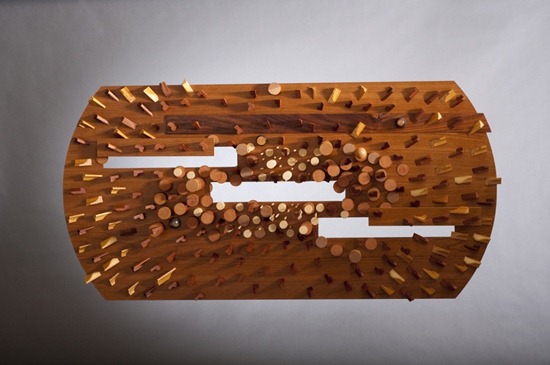 What music do I listen to while creating:

How do I get inspired when not inspired: 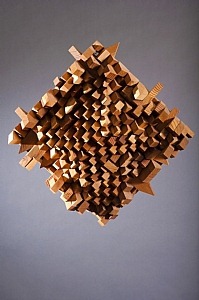 I don’t worry about it, I do other things, some art business related, some not. Then some urge, like missing an old friend, hits me and away we go!

What do I do in my spare time besides art:

I’ve always been a jock, so now I inline-skate and lift weights. I am also an experienced cook and do all the cooking for my family.

What am I working on now or most recently?

“The Crossing” is my latest work. It reflects my other theme that has persisted since 1976, which is ‘reaching across the chasm to others’. (People that is.) The “Crossing’ is a study in form and the idea came from Jeffrey Alan’s works, “Alcmene”, mostly, and also “Achaia” and “Argo”, at http://www.Jalanartist.com.

What is the best artwork I ever created? 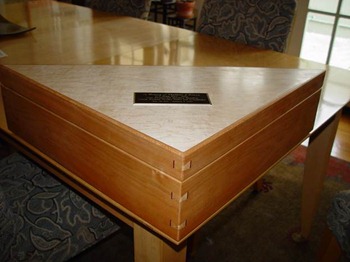 Two American Flag Display cases. Both my father and father-in-law were Army guys, so I made flag boxes for both when they died. The state of perfection in woodworking was almost attained on my Dad’s. Usually my ‘first’ attempt is better, and this was so for my Dad’s flag box.

What role does the artist play in society:

It’s my responsibility to support everyone’s need for creativity and innovation, for themselves and their country. Creativity exists in every human. Sometimes we have trouble finding it. I want to help.

Have I sold many artworks?

Not very many, and none recently.

Can I recommend a great contemporary artist?

Louise Nevelson. She does abstract expressions in wood art. Most of them are monochromatic, 3D expressions of her travels, from Ukraine to America. (she was born Leah Berliawsky in Kiev, a Jewish Russian, and had to leave due to a ‘cultural strain’ with the czarists.)

Something interesting in my life

I lived two years on Kwajalein, a Marshall Island in the south pacific. I was out there because my Army duties were to make safe, any WW II ordnance found. After work we dived on WW II ship wrecks and beautiful coral gardens. 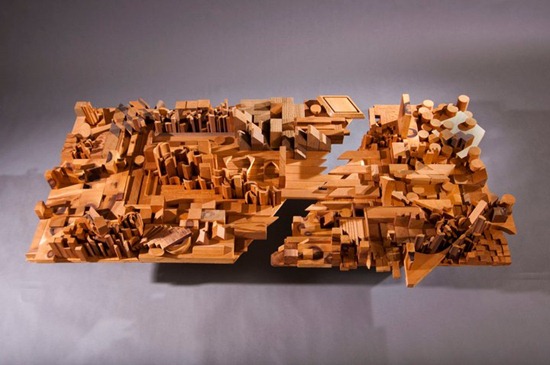 Where do I see myself, artistically, in 10 years?

If not dead, or missing any fingers, I’ll be busier because I eventually found my market. I will be making more mobiles and stabiles too.

Do I have any advice for aspiring and emerging artists?

Take disappointment and frustration in stride. For surely, they will both hit you. Enjoy the ride. There will be peaks as well as troughs.